Lynch Syndrome I,
with the onset of a colon neoplasm at around 45 years of age.

Lynch Syndrome II,
which, in addition to colon cancer, includes the development of extracolonic neoplasms, at an endometrial, ovarian, urinary tract and biliary duct level.

The HNPCC is caused by a recurring mutation in one of the 4 genes that are currently known to be involved in the check and repair of DNA replication errors in all the cells of the body. Around 90% of mutations occur in MSH2 and MLH1 genes (60% in MSH2 and 30% in MLH1) and only rarely involve PMS1 and PMS2 genes. When a mutation occurs in one of these genes, the ability to repair errors during DNA duplication decreases and, as a consequence, mutations accumulate in the cells, leading to a neoplasm. 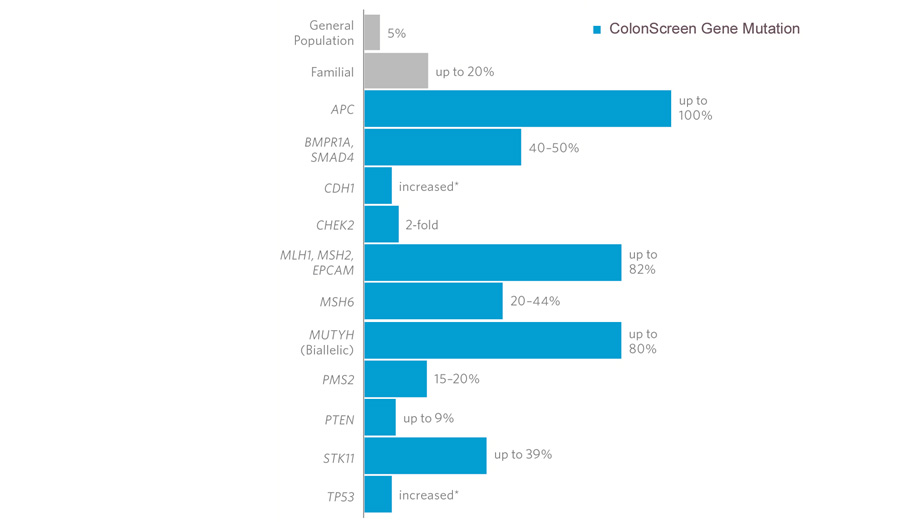 According to statistics, the risk for the general population to develop colon cancer in life is around 6%. For patients (both male and female) carrying HNPCC mutations, the risk of developing colon cancer is around 75-90%.
Extracolonic neoplasms are a severe complication, the most common of which is endometrial cancer. The overall risk of this type of cancer is around 30%, compared to 3% among the general population. The risk of developing ovarian cancer is 3.5 times higher and it may occur 20 years earlier compared to the reference population. 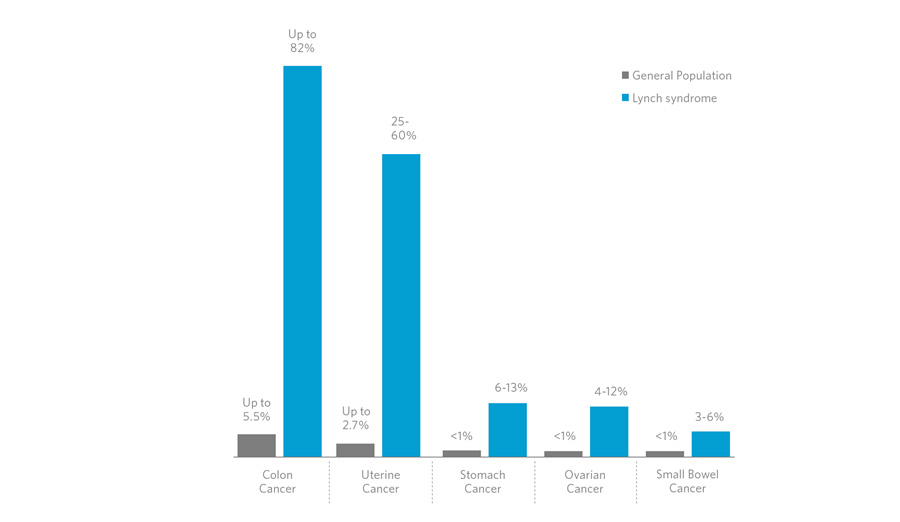 The Familial Adenomatous Polyposis (FAP or Adenomatosis coli or Colorectal Familiar Polyposis) is a relatively rare syndrome that occurs, usually at an early age, with the development of hundreds to thousands of adenomas on the large intestine. Without treatment, FAP progresses almost invariably with one or more colorectal carcinomas, usually when the individual is 30 to 50 years old; the onset of malignant lesions may be seen with careful endoscopic checks and prompt surgical intervention. The FAP is a "compulsory" precancerous condition, because the person that is affected and not treated will almost certainly develop invasive carcinoma.
The FAP is a hereditary, autosomal, dominant disorder, usually at high penetration. Therefore, a careful analysis of the family history could help detect subjects at risk in each phratry on which accurate endoscopic checks must be carried out. Presently, this process is easier, thanks to the detection of the gene that, once mutated, generates the disorder (APC gene, Adenomatous Polyposis Coli).
In a sub-type of patients, a mutation of the MUTYH (1p34.1) gene leads to an automosal recessive polyposis, the familial adenomatous polyposis linked to the MUTYH, which is characterised by a small increase in the risk of developing colorectal cancer and polyps/adenomas in the higher and lower gastrointestinal tract.